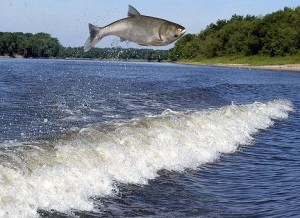 The Amazing Asian Carp is a freshwater fish. It refers to four different species the bighead, silver, black, and grass carp. Today, this fish can be found in the wild in Europe, South America, and North America. It also has been introduced into most of the Indian subcontinent (India, Pakistan, and most Southeast Asian countries) and to lakes in western China. It is currently spreading rapidly throughout the large rivers Asian countries.

These are notorious for jumping that is why they are called “Jumping Asian Crap”. Asian carps jump because they get easily disturbed by boats and other watercraft. This makes them known to be a notorious variety fish i.e. jumping Asian Crap. Fishermen try to catch this fish both in water and in the air. Jumping character of Asian Crap is causing harm to those fishermen who try to catch them. There are many different reports cases about boaters getting injured by jumps of Asian carps.

While the relationship between Asian carp and the populations of other fish species is complex, it appears that when water levels are low, the impact of Asian carp is greater. At the same time, Asian carp, like other fish, have more successful spawns under flood conditions. These fish have the upper hand because they can survive on the most basic form of food provided by the waterway.

In Asia, it has been a popular food fish for a long time, so they are harvested commercially. Asian Carp numbers are also hurt by dams and pollution destroying their natural habitats.

Asian carp are widely eaten in Asia and Europe, and the U.S. has exported them to those markets for years. It is a very popular food fish in many places around the world. These are not so popular in the United States because people respond negatively to the name Carp and assume that the fish tastes bad. Although the Asian carp is enjoyed in many parts of the world, it has not become a popular food fish in America. America has been stuck in part by the name “carp”. This is not a particularly fair judgment, and is more a matter of personal taste.